For many people, cheese is synonymous with an inexpensive, prepackaged version sold in slices at the supermarket. However, this type of industrial cheese is half made up of additives. On the other hand, experts know that real cheese, especially in tablet form, is more refined and has a unique taste. But why are these high-quality cheeses neither square nor triangular?

Where does the round shape of traditional cheeses come from?

At that time, the first cheeses were made by hand. In the early days of cheese production, the cylindrical shape of the cheese wheel turned out to be the most appropriate. Then we realized that the round shape greatly facilitated the different stages of the production process to the final maturity. In fact, from milk curdling, to draining and shaping, this volume offered more margins than possibilities. The heavier and thicker the wheel, the easier it is to turn and move it. Over time, the machines took over. Although there are still avid cheese makers who make it by hand. The advantage of such devices is, of course, the production of more large blocks.

So cheese discs were very practical at that time. It was easy to store and transport simply by rolling it up. There was no danger of them getting damaged along the way before reaching the European markets where they were sold. Immediately, merchants cut it into smaller pieces according to the needs of customers.

It should be noted that the production of round cheeses, such as Brie and Camembert, requires the same level of salt absorption and regular mold ripening activity. In particular Penicillium camemberti and Penicillium candidum which break down the milk proteins in cheese, while releasing flavours. Therefore, this is where the round shape comes in: it will greatly facilitate the process, since the salt and mold will be evenly distributed over the cheese. It would not have been the case if its sides were square.

NB : The molds we are talking about are noble and edible. These are the ingredients that cheese makers use regularly in the manufacturing process, in order to provide a typical and specific flavor to the cheese.
Another important reason: the round shape favors a more solid structure. In fact, the cheese disc provides a better structure for crust formation. And this is far from neglected, because this form acts as a protective shell against parasites: this provides greater protection against insects, unwanted bacteria and other contaminants. Not to mention that when using cheese moulds, usually made of stainless steel, the round shape withstands pressure better than the rectangular design.

Is there a special effect on the flavor of cheese? 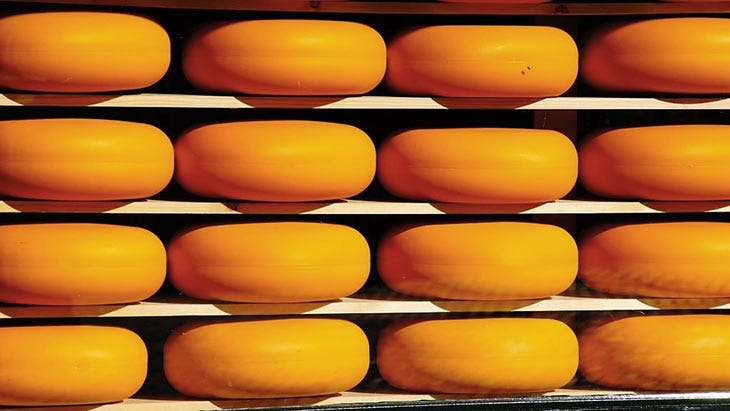 Cheese on the shelves – Source: spm

The round shape also plays a role in the flavors of cheeses with different crusts, such as Camembert, Brie or sheep’s cheese. Thus, when the cheese is round, the mold is better spread over the surface, which gives a more balanced taste. If it’s rectangular, for example, mold will likely form on the sides, but it won’t evenly cover the other surfaces of the cheese.

In addition, you certainly noticed the holes that form in the cheese due to the release of carbon dioxide by special strains of lactic acid bacteria. The latter is added to modify the milk with lactic acid: thanks to them we benefit from the texture, taste and aroma of the cheese. Some will release tiny bubbles of carbon dioxide that form pockets of air. Result: during the ripening process, holes appear in the cheese mass.

good to know It should be noted, however, that the texture, size, and shape of the cheese generally depend on the molds the cheesemaker uses.